Tourney Championship moves back to the Moda Center.... Iowa St. took down #1 UNC with a combination of a lights out shooting performance and some very shoddy offensive sets in the last few minutes by the Tar Heels center/team, turning the ball over 3 times in a row, during crunch time.

The line is UConn -6.5. I don't know too much about Iowa State, except that they were a Sweet 16 team last year. I read that Coach TJ Otzelberger was on staff as an assistant when they beat UConn in the 2nd round of the 2012 NCAA tourney which sadly was Jim Calhoun's last game coaching UConn. Iowa State has had some very good mens and women's teams over the years. As I recall they had a really good coach after Fred Hoiberg, who had several great years in a row but was fired after photos showed him attending a school frat party where he got drunk and kissed some college girls. At the time it was almost kind of funny but that guy basically ruined his coaching career with unprofessional behavior.

That was the best in season tournament performance ever by UConn. They played 3 quality teams and hammered all 3. Absolute great job by the Huskies!
Reactions: the Blades

UConn outrebounded Iowa State 48-19, a devastating +29 crushing on the glass. I do not remember the last time UConn was +29 on the glass against an upper division 1 team.
Last edited: Nov 28, 2022
Reactions: the Blades

I think now we know why Hurley didn’t beg Cole and Martin to stay. He knew what he had.

to win like that with out Hawkins and a lot from Sanogo, is impressive to say the least. We were actually better with Clingan on the floor, most of the tournament. Unbelievable!
Reactions: the Blades

I think Clingan deserved the MVP as he played well in all 3 games and really, really picked up UConn when Sanogo got into foul trouble, but AJ was also outstanding last night with 10 points, a team leading 13 rebounds, and 5 assists with only 1 TO, plus a few spectacular blocked shots, one of which was wrongfully called goaltending. His play in the last 10 minutes on both ends was especially crucial. Newton had 8 TOs last night and UConn had 19 for the game, so having AJ provide good ball security down the stretch was helpful. Iowa State's pressure on the ball was very good but getting waxed on the boards by 29 was something they could not overcome.

Yep.... the depth and overall BB IQ of this team continues to amaze. AJ playing exactly to his high end strengths as a stat stuffer and defender, Diarra with the big buzzer beater and solid performance,
Joey C. and Donavan, it was like Iowa St. got beat by the 2's on the depth chart and had no answers. Then add a solid 38 minutes by Karaban, who always seems to make the right play ( Samson will add even another layer of depth) and Tristan too.... Uconn has so many different guys who can beat you night to night.....

( So I guess alot of that end of season loss of/transfer of Gaf, Floyd, Diggins and Akok was greatly overstated by me and alot of us Husky fans...) 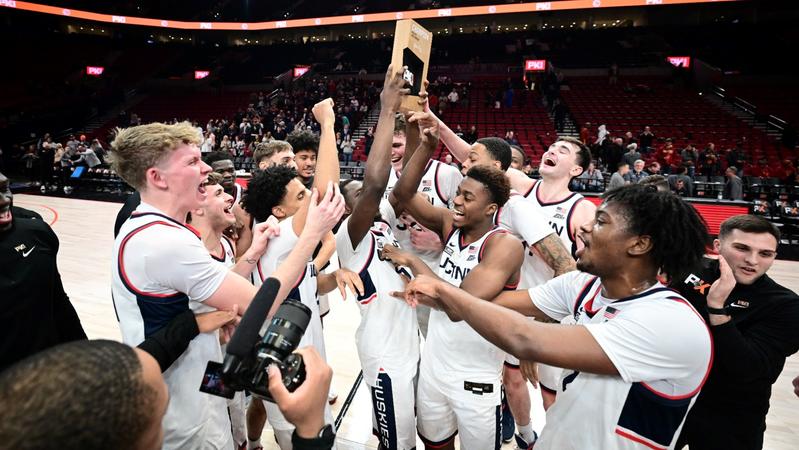 Donovan Clingan had 15 points and 10 rebounds to power No. 20 UConn to a 71-53 win over Iowa State in the championship game of the Phil Knight Invitational tournament

the Blades said:
Iowa St. got beat the the 2's on the depth chart and had no answers.
Click to expand...

Sanogo and Hawkins, who many think are UConn's top 2 players, were complete non-factors in this game scoring 4 and 2 points respectively. And it didn't matter. Foul trouble did not matter. It's been so long since UConn had a team this deep with quality players who can function for long stretches at a high level so that you don't have to worry about putting Sanogo or Hawkins back in. Last year if Sanogo had 4 fouls and had to sit for 10 minutes you were really, really worried. Now it's a complete "no problem" situation if anyone is in foul trouble.
Reactions: the Blades

Big East Freshman of the week-

8 turnovers in a game in too many multiplied by 2. That being said Iowa state pressured the bejesus out of the ball and Newton only had one turnover in the other two games. And 12 over the first 7 games, which is exceptional.

he also made big shots yesterday when we needed them and has a knack for drawing a plethora of fouls. He’s a keeper.

the lefty from va tech is hard nosed, but he is forcing his shot at times. On this team, we need his defense and take and make some jump shots when open.

joey C is his alter ego. Not great on the defensive end, but can shoot it getting out of bed. And also makes hustles plays.

this is looking like special mix of kids. And I hope 24 got the message, we’ll win with you or without you. Because he has so much upside.
Reactions: the Blades

Always interesting to read the opposing team's media reports and found this from the Des Moines Register, which was very complimentary of the UConn team: 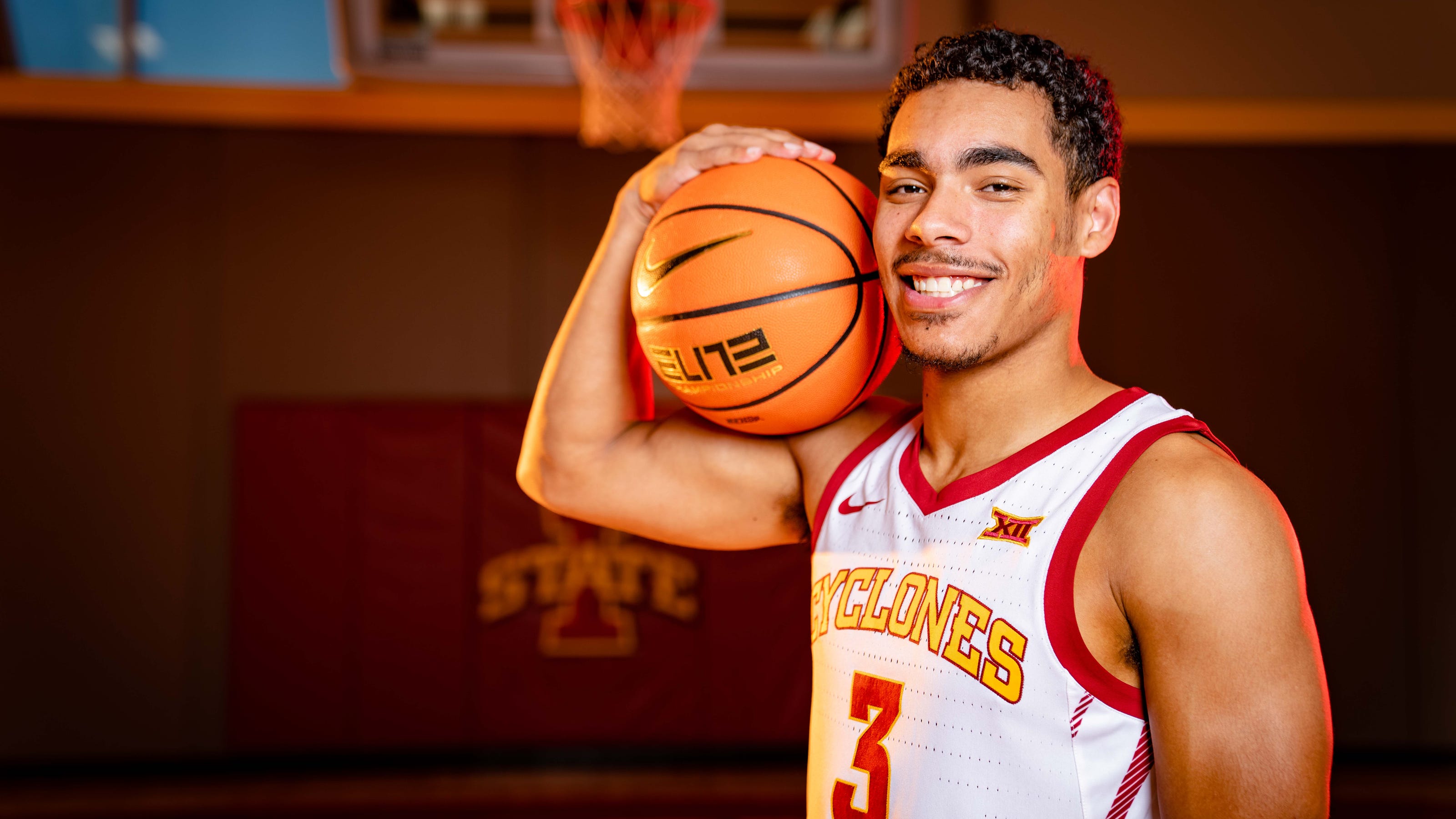 Iowa State's men went 2-1 in the prestigious Phil Knight Invitational. The Cyclones beat half of last season's Final Four in the process
www.desmoinesregister.com
The article primarily cited the UConn beatdown of ISU on the boards, and UConn's perimeter D:

"Iowa State’s other problem was an inability to crack Connecticut’s defense. Each time Cyclone shooters had the ball on the perimeter, they were greeted with a hand in their face. Open looks that were available against North Carolina on Friday weren’t there on Sunday.

“UConn is playing as well as anybody in the country,” Otzelberger said. “They don’t let you get open looks. They did a great job getting to (Gabe) Kalscheur and Grill, taking away our perimeter looks.”

That was especially true for Grill, who missed all five shots he attempted. It wasn’t anything like Friday, when the senior scored 31 points against the Tar Heels. He owned the three-point arc to the tune of 7-of-11 accuracy. Sunday, he scored just one point and was 0-for-3 from three-point range."

You could say that the UConn D got into Caleb's Grill.
Last edited: Nov 28, 2022
Reactions: CaNOLEE
You must log in or register to reply here.